Race to the Clouds

In recent times i had been leaning off my hobbies, haven't written letters in a while, haven't been out running or cycling or biking or trekking, nothing, i would've liked to blame it on the recession, but it's not really affecting me in a very major way, so, it had to be my laziness gene acting up again. The only thing i was doing in the past few weeks is traveling to b'lore and back.
I had been on one such trip to watch a so called "Race to the Clouds" taken from the much more famous and much more dangerous "Race to the Clouds" or better known as the "Pikes Peak International Hill Climb" (watch Video ). But the hill here was the Nandi Hill, it was bikes instead of cars and the course looked like this 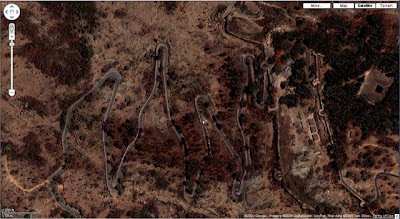 Starting from the first right-handed hairpin on the extreme left of the picture, the bikes would take seven hairpins bends, two long straights and a few other small straights. This event was last run seven years ago and at that time the fastest time over the 1.8km uphill course was set on a 350cc Two Stroke, twin cylinder, twin carbureted, twin reed valved, six speed, 32bhp (in stock trim) Yamaha RD350, a cult bike even after being out of production for more than 20 years. This time around though there were many other bikes which could and did give the big RD a run for its money. All the nimble handling bikes, especially the out of production two strokes, like the ever performing and ever present, for any event, RX, one of the most versatile bike to hit the Indian roads, a two stroke which can give you 50km to a liter, or, if you want it to, can me made to reach speeds of 145kmph on gravel roads in competition mode. This, apparently was the weapon of choice for people who wanted to compete, mainly because it was easy to get hold of a bike and it was easy to find someone who can do an average job of modifying it and if they screw it up, it was easier to find spares for it. But there were other bikes ranging from the legends such as the RD from Yamaha, the Yezdi from Ideal Jawa in Mysore, the Shogun and Shaolin from Suzuki, the newer Fiero Apache from TVS-Suzuki, almost the entire stable from Royal Enfield which was kinda pointless for a hill climb, come on, a thumper participating in a hill climb? you gotta be kidding! The main attraction was, however, something entirely different and in a different league. When Subb and I went to park the bike next to a truck, an old man came chasing us off saying "The TVS bikes are gonna be parked here, search somewhere else to park". We didn't understand what he was talking, so we asked him, where are they gonna come from? He pointed to the truck in front which was sealed shut with cloth and rope. It was then we came to know that TVS Racing had entered their bikes into this race. We kinda hung around the TVS truck so as to catch a glimpse of the bikes, but kept our eyes on the so called, unofficial practice sessions going on just down the road with people riding putting everybody at risk, recklessly, at neck breaking speed. Some very well tuned machines we noticed were the RX 135 of T.K. Vishwanath, that's him with the blue shirt at the back door of the van. 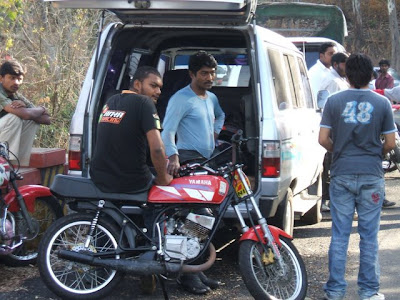 a chambered RD350 which sounded awesome and went like a rocket with wheels on the straights! 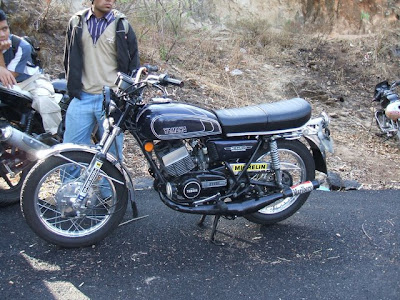 A blue Suzuki Fiero, which was performing very well, but don't know what happened to it in the actual race. 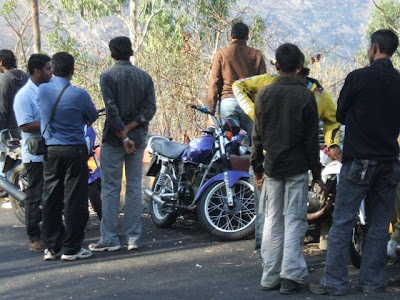 After a huge delay of nearly two and a half hours clearing non-competitive traffic from the course and trying to get the pedestrians to stop at the side of the road, the race was ready for a start. In the meanwhile the competitors were getting themselves and the machines ready to race. Many were practicing recklessly on the roads with regular traffic moving in both directions, some were just catching up with old friends, fellow competitors, and the like. some were tweaking up the bike for one last time, probably trying to get the mixture right for the altitude while some others had damaged their bikes even before the even had started. Meanwhile the TVS guys decided to reveal their ammunition to the general public and unwrapped their trucks, in the back were tucked 5 supremely tuned, wonderfully minimal, intricately well thought and designed bikes. with the platforms taken from regular road going bikes of the past and present and along with them a full set of tools, spares, petrol, oil and mechanics. As they lowered it onto the side of the road, they started coming into full view, a stable of race prepared bikes, one each of Suzuki Shaolin, Suzuki Shogun, TVS victor, TVS Apache RTR 160. The two strokes were with chambers and imported Mikuni flatslide carburetors with power-jets, which i later discovered to be TM28SS. The Apachce had a solid aliminum chassis for most parts and a single shock absorber. All bikes sported aluminum wheels for weight reduction and a battery controlled and probably programmable ignition systems. Then they took out the 5Th bike, a suposedly custom built, motocross prototype bike, with aluminum swing arm, liquid cooled 125 cc engine, Ohlins dampers (the best in the world) and the works. They'd named it 125 RTR-X. 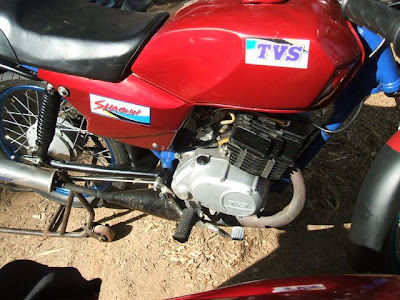 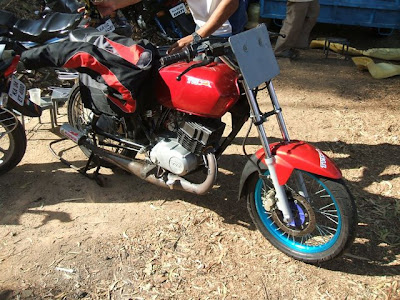 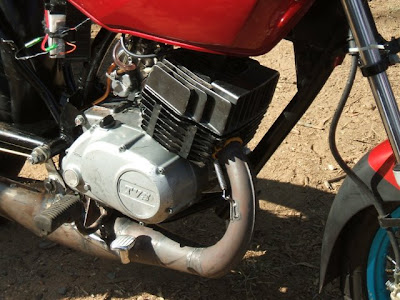 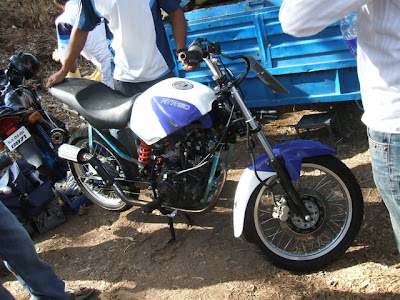 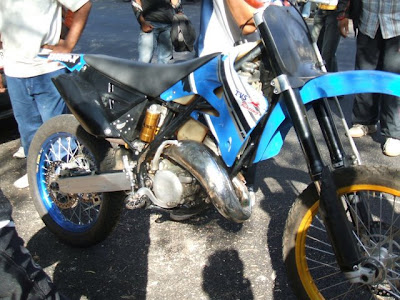 As the race started, the prototype racing machine was the first to take flight. Sub and I immediately found out how well designed that bike was, it entered the power band at a very high rev and its power was very peaky. The rider was shifting up the gears every two seconds and accelerating like crazy. obviously we couldn't see the bike for more than a few hundred meters, but could hear the bike almost all the way up the hill. Next up were some other two strokes, then there was the foreign class which saw the likes of the Honda CBR 600RR and the Suzuki GSX.
The race was decided into segments depending on the displacement of the bikes, and therefore each class had it's own winner and then there was an overall winner for the meet. The Yamaha R6 won the overall prize for the meet clocking 1min and 24 seconds. But the excitement was to see the tiny two strokes ridden by some of the best riders of the day give these huge, over engineered, multi cylindered, multi evolutional machines a good run for their money.
The difference in riding style was very boldly obvious, compared to the other guys who first downshifted, then braked then leaned into the corner, took the corner and accelerated, the Seasoned riders closed the throttle, braked, downshifted and started leaning into the corner all at the same time, and so were able to carry much more speed into the corner taking beautifully pre-decided lines through it. The factory backed bikes were easy to pick up while accelerating, but one bike, notable the RX of Vishwanath was what caught my mind, i noticed that his bikes didn't pick up well from a lower rev, well, i say that in comparison to other racing machines. He had an excellent and potentially deadly way of compensating for it. When he came to the second hairpin, he braked much earlier than the others, downshifted and opened the throttle even before he entered the corner, by the time he was at the exit of the corner, the bike was into the power band and picked up speed just as well as the factory bikes! If he was too early, the bike would've gone out of control in the middle of the corner, if he was late, he would be just as slow as any other ordinary bike. He did go on to clock an impressive time!
Then came a crowd of RX135! there were so many bike it was difficult to keep track! some were good, some were bad, some were ridden badly and almost most of them were smelling of burnt clutch! I shall leave the gearless scooter class thinking it was a mistake on the organisers for which they're regretting even as we speak.
Nearing the end of the meet came the big boys, the RD, kind of a bike of the past, but still competitive, but probably none of the RD350 was in it's full racing glory. But it did put on a good show, was visibly faster than most of the bikes of the day and was a sure-hit crowd-stealer! One of them, the one with the chambers even did a wheelie while accelerating.
There was the foreign open class still remaining while we decided to leave and reach home before it got too dark. It was a good day on the road, the sights, sounds and smell of bikes did give us a high, and my interest in bikes has been rekindled ever since that day, especially after i came to know that the person who won the event overall was a 40 year old man and not some college going adrenaline junkie as I expected! well, i guess you're never too old till you start thinking you are! I think he was wearing a tee shirt with "18 till I die" on it underneath the racing overalls! We reached home extremely happy and contented people! It had been a long time since I'd seen some good biking action. It felt liberating, I've been doing some alteration or other to my bikes since that day! Hope there are more of such events in the future! Till then, chao!
Posted by Gecko at 08:58