Clutch (updated, with pics too)

The IC engine clutch, perhaps the most important piece of equipment on a bike, the part which makes the power produced by the engine usable at all speeds, partially, along with the gear box that is, is a simple yet sophisticated arrangement, the working of which if you think for too long will drive you crazy! it is to the most part inefficient, purely frictional, heat producing, energy consuming and not-fully-work-transferring set-up, but it works, as in the heat produced is acceptable and is used, with the engine oil, to heat up other things in the engine which do require heating, and the frictional slippage is negated by using many plates and tough springs.
All said and done, what it is, is this. It's a jigsaw of thin circular metallic discs, some toothed on the inside and some on the outside, sitting alternatively in purpose built slots on two different cylindrical drums, one driven by the engine and another driving the gears, bolted to a single shaft and rotating concentric to the shaft in its axis, held together with strong bolts to make sure relative motion when they're engaged is zero, at least that's the aim.
Here're are a few pics 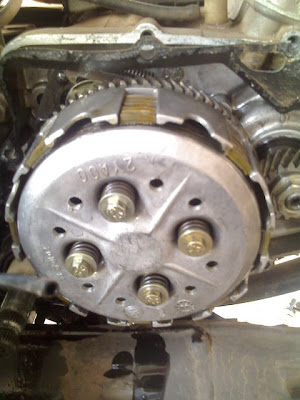 1. This is how the whole arrangement looks like from the outside. 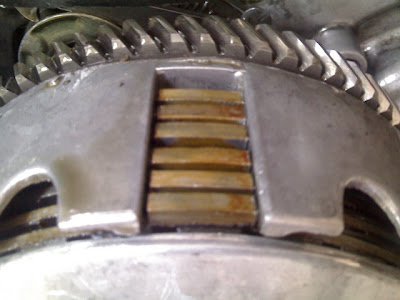 2. The tabs of the cork plates, slotted on the outer drum driven by the engine 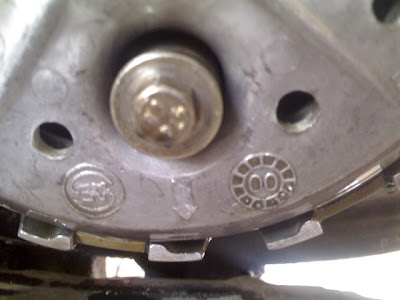 3. The alignment arrow-mark to help reassembly 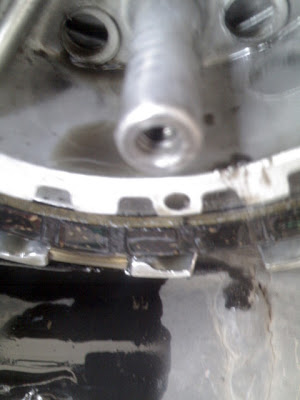 4. You're supposed to align the arrow mark to this punch mark. 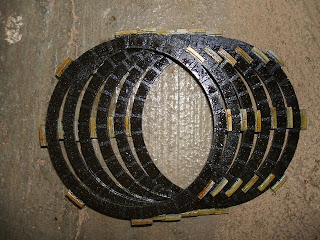 5. Look how badly burnt the plates are, they're almost black, and tused to stink like crazy when i rode the bike hard, stench of burnt cork!

6. The friction plates, from the RX on the left and pulsar no the right. See the the arrangement of the tabs in the set at the left, and the marks on the plates for better bite. the pulsar's plates are bald! the pulsar 150 cc old (4 cork and 3 steel) clutch is the worst clutch I've ever ridden! and the Suzuki fiero's, the best! 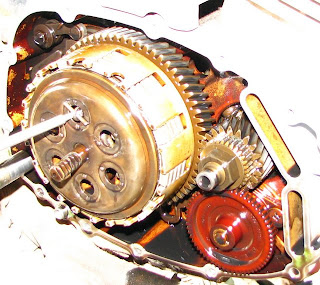 7. The suzuki fiero's clutch during disassembly, it has a unique 'old school' way of fitting the clutch springs. This is one very effective piece of kit, the whole bike in fact! 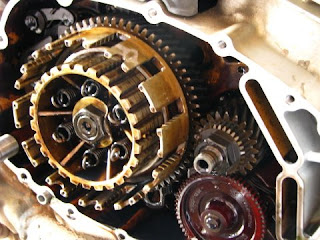 And that aim was what was not being fulfilled in my bike, thanks to a crappy mechanic job which was done to it while it was with it's previous owner...
So I decided to put in a new clutch, finally got the heart to open the bike up to do some work, after growing into it for almost a full year , letting it gather dust without an oil change! :| Asking a word with my friend revealed that, apparently, the clutch costs 195 bucks a set! So I thought "why not" and went to the Yamaha Showroom and ordered a set, he said 53 a plate! now, I don't know whether I was ripped off or whether he got lucky or whether he god low grade stuff... but I was really shocked, and there was no turning back, I wanted a new clutch and I almost wanted it yesterday! so, "bill it" I said. along with some other necessary stuff. Came home, got into my mechanic clothes and drained the oil... my first surprise, the oil nut wouldn't come out easily! did someone jam the crank case??? well, with a little tug of war, I got it to separate from the engine... then my second surprise.... the oil is black, greenish and flowing like water! was it running on 2T oil?? or a synth blend?? this was preparing me to face some weird stuff inside. Then I unscrewed the screws of the clutch cover and open it up.. I see the case looked clean, but the big problem!!
what had happened is this. he'd gutted the baffles of the exhaust, increased the port heights which effectively increased the power band to much higher up in the rev range, therefore making it much violent in full throttle acceleration, so to counteract the clutch slip, he'd put in 6 friction and 6 drive plates making two metal plates rubbing each other, this extra plate had caused the clutch to open up unevenly in the clutch-boss and clutch basket thus increasing uneven wear on the clutch and increasing slippage.
The clutch change went well, the friction plates were burnt black and the metal plates were scored, so had to run to the showroom again and get new metal plates! each plates costs 81 bucks and I needed 5! Already 750 spent in a few hours and counting, cause I knew I would need engine oil later! After coming back home, I forgot how the clutch plates went back into the basket! In the Yamaha, the clutch plates are weird, there's a tab on each metal plate and I was confused whether all the tabs were supposed to be superimposed or should they be staggered. I tried to think up some logic to guess how they'd fit, but nothing worked. It then came to my mind that I have an old service manual of a Yamaha DT125 dirt bike. I opened it up and saw that it had the same clutch as my bike, so the tabs go staggered at approximately 60 degrees relative to each other. I put that back and sealed up the clutch basket.
While trying to put back the clutch cover, disaster struck, the kicker shaft, gear and return spring fell down from the crank case while I was struggling to fit the cover and I didn't know how it went back it. I tried a few alignments, but couldn't crank the engine at all! it was frozen solid. Went back and forth to the manual trying to search for the kicker assembly diagram, they'd given it, and explained it too.. but I had already panicked and so couldn't understand a word of it! called up a friend, wasn't of much help since he'd never worked on this bike. it took me more than 3 hours by the time I figured out how it fit! then whatever I had read earlier in the repair manual made perfect sense! so much for my state of mind! I went, got another can of oil and started her up... the clutch bites well now! hope it holds for long too! Anyway, I learnt something new! small mistakes matter a lot, and consume a lot of time if you're not familiar with doing stuff or don't have resources at hand! Till next time, happy biking!

P.S. The guy who told me it was 195 for a new clutch, well, he was right, it's Mr. RX by the way, and his bike has four cork plates compared to the six of mine! and plates were cheaper a year ago, so, clarification. Sorry Mr. RX :)
Posted by Gecko at 18:06