A recent visit to the ortho for a knee pain made me forcibly give up running for a while till things got better. I was aching to run every evening, and sometimes when I did disobey the doc, I was aching, literally, to get back home, the pain was becoming unbearable, more so was the disappointment of not being able to compete in a much awaited international-standard running event which was due in a couple of weeks. The frustration increased by the fact that I had already registered for it quite well in advance!

The diagnosis was a strained knee, which sucked by the way, cause nothing was wrong with my knee except the look of it (full of scars from my childhood unlike the kids of today). The actual problem was (and still is), however, the iliotibial band which was hugging my knee a little too tightly on my right leg so it had a habit of rolling and rubbing on the side of my knee and getting irritated as a result (silly muscle).

Three days before the event, I had decided that I would run even if it means I would have to get my knee operated once I come back, if something had to give up, would've had to be my knee! Not me! I was searching some last minute tips to find comfort and ease the pain by some exercise and voila, I found it, it is called an “Iliotibial band stretch”. Thanks heavens I thought, and right from Thursday evening, I was stretching it every hour for it to loosen up by 0900hrs Sunday, when the clock would start.

Friday, and there was not much improvement although things got a little better in the pain section, but still I couldn't have completed 10km in the condition I was on Friday. I had gone sloppy, I was sweating as soon as I hit 2km on my daily runs and gasping through my mouth. I'd hoping my muscles remembered something come Sunday and slept in that thought.

Saturday, I had to travel to B'lore to collect my running number. The bus journey didn't help much, after sitting in a position for nearly 2.5 hrs, I was not able to descend the steps of the bus to get out, knee had frozen up again! Hmmm... time to start stretching I thought to myself and carried on.

Trying a weird dance step from one of the classical Indian dances in the middle of the sidewalk dressed in jeans and a sports jacket isn't the best of feelings in the world, but that was exactly how my exercise looked. Also, I did put my friend in a lot of embarrassment too cause of my weird poses while we had gone for our numbers. My apologies!

Kanteerava Stadium, myself and my friend were suddenly overwhelmed by the scale on which the event was conducted. There were people everywhere, and stalls, and people, and sponsors and more people, well... you get the idea. There was also a full scale model of a Formula-1 car, it's team owned by a local booze baron who was also sponsoring the event and as I later found out, the water too. And right next to the car were a few people.... ahem ahem... we named then “chaddi chicks” (You'd know what I'm talking about if you're an Indian, and you'd get the humor more if you're a local Kannadiga). Those “chaddi chicks” took a part of my attention off my pain (yes, I'm not hiding). Finishing up all the checking out to our heart's content, we then started checking our numbers. Which we found without hassle and also the timing chip used to record our times.

It was now time for a meeting with old friend. Sitting in Pizza Hut, we ate to the brim of our stomach and filled the small gaps with ice-tea. Heading back home, we were treated with nice evening coffee, something that always brings cheer! After discussing small things about bikes and tuning, it was time to head back home and a good night's sleep for we had to get up early the next morning to load up on high energy stuff for the race. I drank a liter of electral the night before and had a pack of biscuits & a banana apart from my regular meal.

Sunday morning, the alarm went off at 5:45am, the day had dawned, the feeling was larger than life, the butterflies all too busy in my stomach. I had to load up, another half liter of electral, half liter of water, a pack of biscuits, a banana and some more biscuits made my power breakfast, made me wish I could fit bigger jets to my stomach and not worry a thing after that. I had to time it well, eating too early would make me hungry at the start line, eating too late would make the food stay in my stomach which effectively made it useless. I started stretching heavily and went on stretching all the way to the stadium psyching myself up to forget the pain that I knew I would experience soon, how soon was the main question on my mind. One km? Or may be two or three? Who knows, may be ten too, yes? Optimism. 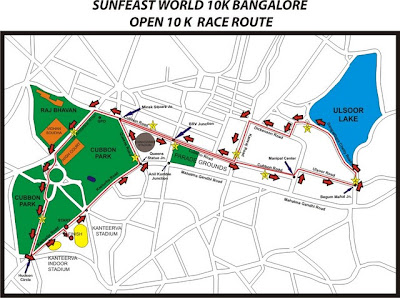